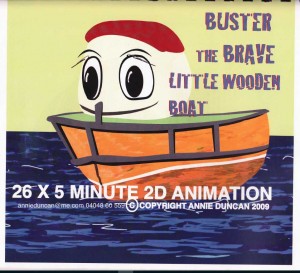 The process behind Buster & Jack has been a long endeavour. With script development starting back in 2008 to finally hitting the air in 2014.

Here you can get a sneak peak of the amount of edits and changes that went into developing the Buster & Jack that we know today.

Looking back at our original idea for the intro it is amazing to see how the style evolved the way it did.

Here you can follow along with the original storyboards to the intro. These also include very early development of the Harbour Master character. Click on any of the images to begin viewing the gallery.

Below we have some very early development pics going right back to the original script, initial Buster & Jack mock ups and the two seals. Buster wen’t through various changes to get where he is today.

Lastly we have some storyboards from The Ghost Ship episode. We started to discover a lot of new techniques when we reached this episode which later shaped many of the other episodes to turn out the way they did. In many ways this episode marked a turning point into an even better direction.